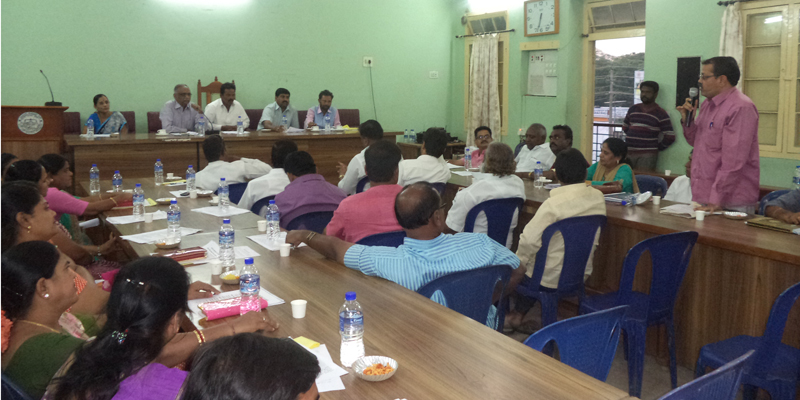 DBCLM (Don Bosco Child Labour Mission) got a unique and rare opportunity to get the support and collaboration of the city administrative body in the Project of CFCI. As Davangere is chosen for the smart city programme the corporation invited suggestions from the civil society for the preparation of Budget for the coming financial year. DBCLM made use of this opportunity and submitted a memorandum to the Mayor and the City Commissioner to include the concept of Child Friendly City in the budget and in the building of a Smart City.

Submission of Memorandum to the City Corporation’s Administrative Body

On 24th Feb 2016 DBCLM submitted a memorandum to the Mayor and the City Commissioner to include the concept of Child Friendly City in the budget and in the building of a Smart City.

Through the memorandum DBCLM highlighted the fact that every year the corporation spends crores of rupees for the construction of roads, drainage, street lights, parks, garbage disposal etc. no budget is allotted for children’s welfare. We also pointed out that even now many children are exploited and there are many children who are forced to do begging, rag-picking, and work in other sectors. We also find many children who live on the street of the city.

There are many children who are affected and infected by HIV.  Davangere District has 25,000 children with special needs. And no budgetary allocation is made for the welfare of these children. In this context DBCLM placed the following demands in the memorandum submitted to the City Corporation:

The Mayor and the Commissioner of City Corporation assured that they would discuss with city Corporation members when the budgets is presented and would include the concept of  Child Friendly City in the budget.

After many meetings with the Mayor and the Commissioner of Corporation we got an opportunity to conduct a consultation meeting on CFCI with the City Corporation- Commissioner, Mayor, Deputy Mayor and 41 Corporators of the City.

On 24-02-2016 before the budget session of the corporation. DBCLM was given a chance to present the concept of Child Friendly City Initiative of the DB Forum for the Young at Risk. DBCLM gave a presentation on the following points:

Thus DBCLM was able to involve, consult and train one of the most key and strategic stakeholders namely the city administration on the CFCI Project.  The promise of support and collaboration given by the various stakeholders has increased our confidence to launch this programme successfully.