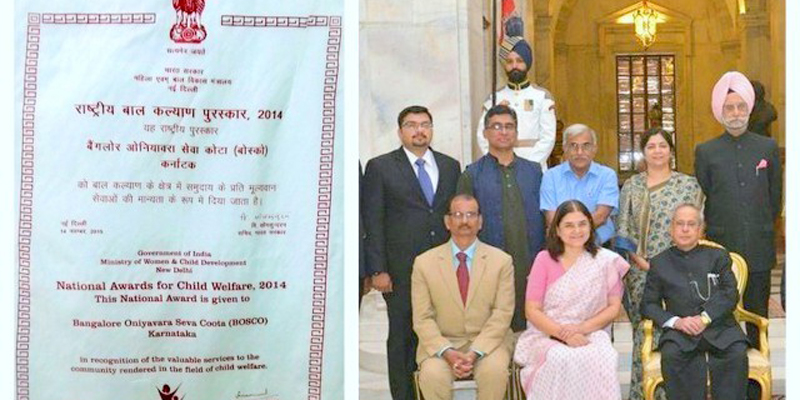 BOSCO (Bangalore Onivyara Seva Coota) has won the national award for ‘Child Welfare -2014’, for the services rendered in the field of welfare of children. The award which consists of a citation and a cash prize of Rs. 3 lakhs was presented to BOSCO by the honourable president of India, Mr. Pranab Mukharjee at a function held at the Rastrapathi Bhavan on 14 November, 2015, the Children’s Day. Fr. Mathew Thomas, the Executive Director of BOSCO received the award on behalf of the organisation.

This award instituted by the Government of India in 1979, in order to encourage and recognise the voluntary  sector is perhaps  the highest national recognition for voluntary action. The state of Karnataka had nominated BOSCO for this award in the month of April. A high profile national selection committee headed by the Minister of State for Women and Children, after going through the nominations made by every state found BOSCO, the most eligible to win the award.

“The award is a recognition to the hard work put in by several Salesians and staff of BOSCO for the past 35 years. A blessing from Don Bosco, in this bicentenary year, it is an acknowledgement of our resolve for the welfare of the lost and the least.”, Said Fr. Joice Thonikuzhiyil, the Provincial, responding to the award.    “The award is a fitting recognition, long overdue. Considering the amount of work we do and the quality and professionalism present in our work, I am not surprised that we won this award.”, said Fr. George P.S, former executive director of BOSCO and currently the economer of Salesian Province of Bangalore.  “It is heartening to note that BOSCO has emerged as the reference point and benchmark in the area of Child Welfare. The award will be an added booster to team BOSCO and the Salesians especially those working in the Young at Risk (YaR)  sector”, Said Fr. Mathew Thomas, the Executive Director of BOSCO.