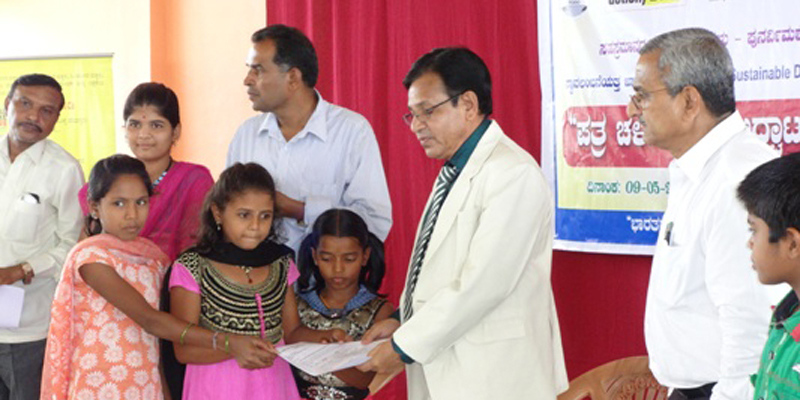 “ACTION/2015” is a campaign across the world in the cotext of the new Sustainable Development Goals. This campaign is a result of a meeting of world leaders from 189 nations, including India, which took place 15 years ago. At the meeting, leaders of different nations agreed upon eight Millennium Development Goals (MDGs); and this year, the world leaders have to come together, for assessment and evaluation of the MDGs and draft new goals for the betterment of their nations. By the campaign “ACTION/2015” we are making known the needs of the children to the Prime Minister, which would be a help to analyse the situation of the children and provide appropriate remedies. In India, this campaign was launched in January 2015, in 16 different states, to voice the rights of the children and to better their living standards. Thorough writing post cards, thousands of children appeal to the Prime Minister to make the living conditions of children, safe and secure. In Karnataka, BREADS Bangalore is mobilizing 25000 children to write to the Prime Minister under this campaign.

In the district of Davangere, through the collaboration of BREADS, the community of Don Bosco launched the postcard campaign. This was well participated by students from residential bridge course of Suprabha, children from child rights clubs from different villages of Jagalur and Harihar taluk, and staff of Child Line and CWC.The Honourable chief guest C. G. Hunugundha, Member Karnataka State Human Rights Commission Member inaugurated the function by writing the first letter to the Prime Minister. He highlighted that importance to be given to human rights and in particularly to the child rights. He said that the priority given to human rights should also be given to child rights because children are the most vulnerable group in the society in this present scenario. “I strongly believe that in order to make it possible and to enjoy the benefits of the child rights, children themselves should be engaged in such activities”. Mr. C.G. Hunugundhu congratulated