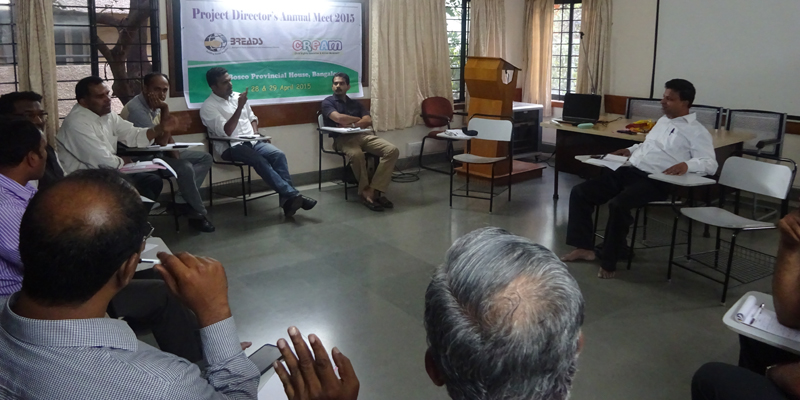 The Annual Meet of CREAM Project Directors was held at Don Bosco Provincial house on 28th and 29th April 2015.  On the first day, Fr. Joy Nedumparambil, Executive Director, BREADS moderated and facilitated the annual evaluation of CREAM Project. The project directors critically evaluated the results of CREAM project and observed that the project has made significant impact among the children to promote their rights and especially their right to participation. It was decided to focus on strengthening the existing programmes rather to initiate more programmes under CREAM project. Various suggestions were given by the project directors which would be considered for the follow up plan of CREAM Project after 2015.

The second day was devoted for training the project directors on advocacy, networking and social movements. The first session was handled by Fr. Thomas Pallithanam SDB, the director of PARA on social movements. He gave some insights on the new Sustainable Development Goals (SDGs) of UN and discussed how to streamline our programmes in lieu with the new SDGs. It was followed by a dynamic discussion on social movements and how to make the CREAM project into a movement for child rights promotion.

The second session was lead by Mr. William, the Country Director of “Every Child” on advocacy and networking. With an experiential sharing, Mr. William shared thoughts on advocacy and networking and explained the importance of the collection of data, focus on themes, theory of social change and the importance of M& E for an effective advocacy plan. He also gave a framework for preparing an advocacy plan.

It was also insisted that every project should use the CHILDMISS software to document their data and programs.