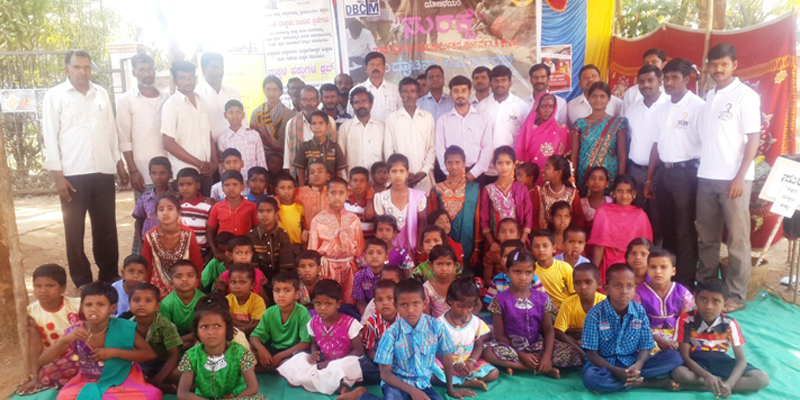 “More than one-third of the country’s population, around 440 million, is below 18 years of age. India’s children are India’s future. They are the harbingers of growth, potential fulfillment, change, dynamism, innovation and creativity. It is necessary that for a healthy future, we must protect, educate and develop the children population so that their citizenry is productive”. (S.C. Bans Employment of Children in circuses)

Don Bosco Child Labour Mission (DBCLM) too is firmly rooted in the conviction that for a healthy future, the child population of our country must be protected educated and developed.

DBCLM found that in violation of all the norms to protect children from all forms of exploitation, hundreds of children are forced to work with their parents in the Brick Kilns at Harihara and Harapanahalli Taluks of Davangere District. A sample survey in 2014 identified more than 800 children working there with their parents. Being a contract work, children even at the age of two help their parents in the process of mixing mud to make bricks. They hail from various Districts of Karnataka like, Bijapur, Haveri, Bagalkote, Dharwad, Gadag, etc.

After the fact finding survey DBCLM submitted a memorandum to the Deputy Commissioner, requesting him to do the following,

Training of the owners of the Brick Kilns on child rights and child labour issues.
Training for Taluk level officers especially inspectors under section 17 of Child Labour (Prohibition and Regulation) Act 1986.
Tent schools and special school for children.
On 14 July 2014 the Deputy Commissioner called for a meeting of all the District Level officers of different departments, the Project Director of National Child Labour Project Society (NCLP) and NGOs and discussed the issue. At the recommendation of the District Labour Officer, the Deputy Commissioner asked DBCLM to implement the above programme under the NCLP project.

And finally in December 2014 the Deputy Commissioner sanctioned a Residential Bridge Course for the rescued child labourers of brick kiln. After two months of continuous effort 54 children were rescued from this sector. Surakshe – Rehabilitation center with good facilities for children – was set up for them at Harihara in an unused government building. There are 48 children in the center.

In his inaugural speech Mr. C.H. Hiregowder greatly appreciated the effort of DBCLM in creating a child labour free Davangere and promised that all effort will be made to make Davangere District child labour free. Mr. Sunil Kumar, PSI said that he will file criminal cases against those who exploit children and violate the existing rules.

The newly admitted children performed many dances and thrilled the audience. It is a new dawn for these children. This is DBCLM’s third rehabilitation center for child labourers at Davangere.