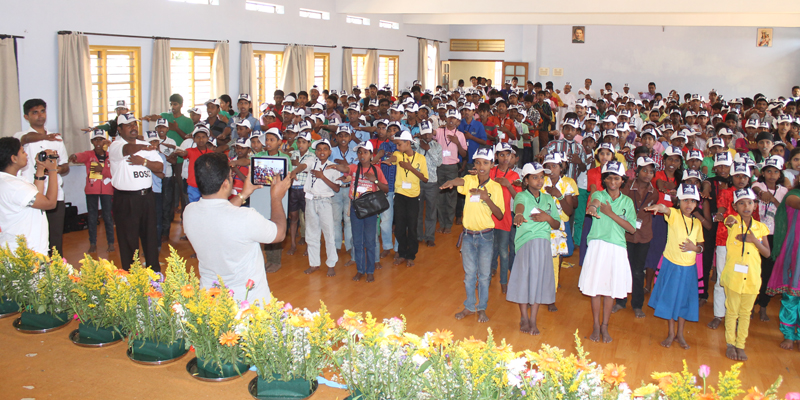 YUVA SPANDANA 2015, a state level campaign of BREADS_CREAM partners with the theme children fight against child labour and child marriage was held at Don Bosco Tumkur for child rights club members as well as rescued children from all over Karnataka State. The program which began on 6th evening with group discussion on curbing child marriage ended on 7th evening with children taking an oath to stop all forms of violence against children.
Children from twenty locations in Karnataka travelling several miles came early enough to participate in the long awaited program. On arrival they were divided into six groups, followed which ice breaking session was conducted to familiarize with other children.
Second day was solely set apart to empower children to be champions of their rights and to be ambassadors of child rights. Child rights activists as well as “rescued children turned out activists” handled topics such as ‘Children’s right to be heard and their right to participation’, and ‘Children as protagonists of their own development’. Don Bosco is commonly known as friend of children who tirelessly worked for the welfare of the children as‘Father of voiceless and defenseless’whose bicentenary of birth occurs this year. Resource persons highlighted the topics with relevant examples and children had ample time to interact with resource persons to clear their doubts. During the public function Child Right Commission Member Edward Thomas urged children to report every child right violations at the earliest. He also requested the Mayor of Tumkur Mrs. Geetharudresh who was also a guest at the august gathering to give primary importance to welfare of the vulnerable children as several children are found in and around Tumkur. Master Bharath Kumar who is the President of the State Network of Child Rights Clubs, Karnataka narrated the efforts that he has personally put in to enroll child labourers and school drop outs back to school. With a sense of fulfillment he invited every participant to save minimum of 10 children every year.
Each of the Don Bosco settings came prepared with skits and dances depicting the violations on the rights of the children calling every participant to be child friendly people. Discussions were carried out after each of the program helping children to report the violations immediately. The campfire brought an end to the program. Muthuraj who attended the program said, “I really liked the program. I always wanted to do something for the children after seeing my classmate getting married at the age of 13. Now I have gained sufficient knowledge and I am courageous enough to stand against the violations against children. Along with my companions I am planning to initiate a house to house campaign during summer holidays to create awareness on child marriage as my District Gulbarga is known for child marriage”.
Under the project CREAM, Don Bosco institutions work on the issues of child labour, out of school children, child marriage, homeless and orphan children, street/slum children, children sexually abused, trafficked children, migrant children, missing and runaway children and children from dysfunctional families. For the well being of the above categories of deprived children/youth BREADS’ partners reach out to them with village study centers, child rights clubs, child rights awareness programs, children’s homes, various formal education programs, skill training, training of various stake holders in the society on child rights, shelter homes, youth hostels, out reaches into the streets and other situations of risk, CHILDLINE telephone services, Missing Children Bureau, Homelink, research and documentation centers, working in Government structures for children/youth, etc.