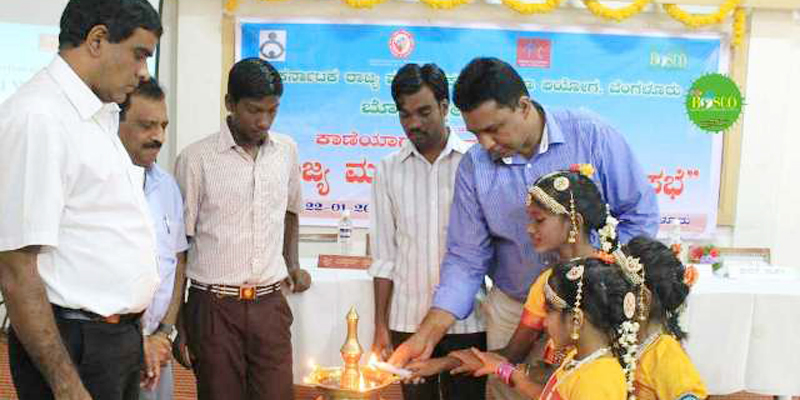 The workshop began with rescued children lighting the lamp along with the dignitaries with a silent invocation that every child who is missing be traced and helped to live in a healthy environment. Master David, a boy staying in BOSCO’s group foster care, touched the hearts of the participants when he narrated his own continuous struggle to know his parents. He requested the Directors and those in the field to feel the pain of the suffering parents as well as the children.

Fr. George P.S, the Nodal Director of Missing Child Bureau (MCB), in his keynote address gave a brief picture of the country on issues related to missing children. He stated that as this one-day consultation was being held, a minimum of 70 children go missing. Every hour eight children go missing in our country, bringing the number to nearly one lakh per year. More number of girls, about 55%, is missed compared to boys in our country. Often the girls are trafficked for various purposes and the rest of their life is in darkness.

When it comes to tracing of the missing children, 45% of all missing children have remained untraced. It is to be understood that only 50% of missing children are reported to the National Crime Record Bureau (NCRB). Many complaints about missing children are never brought to the notice of the police, especially those in the commercial sex trade, child labour, etc. Tracing also becomes difficult as parents fail to file missing complaints and produce identities and recent photographs of their lost children. As there is no proper coordination among the States, children get stuck up in some government run homes or with NGOs making the repatriation and reintegration to the child’s family difficult.

The legislation on missing children in India is inadequate and each State follows different procedures. The Supreme Court of India in the recent times against a complaint filed by NGO Bachpan Bachao Andalon defined ‘missing children’ and directed the State Government to take stringent steps on the issue of missing children. This may help in bringing out certain effective strategies in tracing the missing children.

In the afternoon, the participants numbering about 60 interacted with the Child Right Commission members on issues related to missing children. The questions ranged from police often unwilling to file a missing complaint up to lack of coordination between various functionaries in achieving the purpose. Commission Member Edward Thomas who moderated the interaction urged the participants to work closely with the homes run by the Government as well as NGOs so that the data of all the unaccompanied children can be collected. Such a step itself may solve the puzzle of many a missing child. Narmada Anand, Program Officer, ICPS promised that she would call a meeting of all District Child Protection Officers (DCPO) of the State of Karnataka along with the Directors of MCB at the Districts to sort out the ground level issues and to improve the strategies for tracing the missing children. She was confident that Karnataka can be a model state with its present District Model with Nodal agency in Bangalore. The consultation ended with a firm resolve by the participants towards working for the cause of missing children through effective and modern strategies.