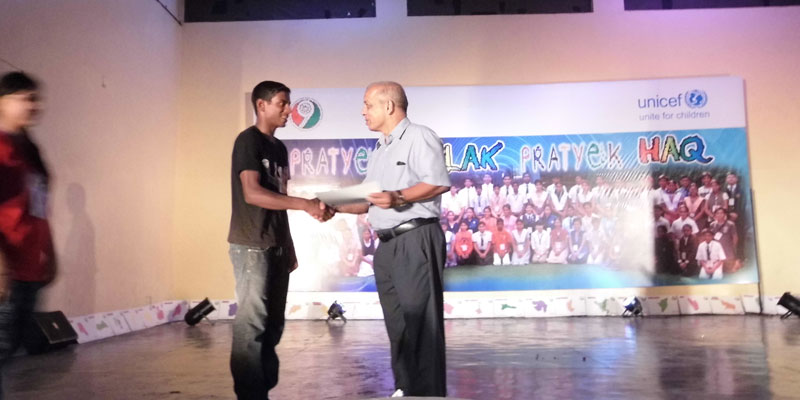 Nineismine is a campaign started by Wada Na Todo Abhiyan a decade back to get the 9% of GDP promised by UPA Govt. (6% for education and 3% for health). There has been campaigns over the years to make this promise a reality. And still it is not materialized. As the international community is observing the 25 anniversary of CRC a four days workshop on ‘make real my rights’ was organized by PRATYEK in collaboration with UNICEF & Nineismine. The purpose and objective of the campaign was to train children to do social audit in their own respective place across India and collate these reports and send it to the UN for the Universal Periodic Review (UPR) of India, to tell the UN body how much India has been successful or failed in implementing the CRC and the recommendations that were given in the previous UPR in 2008.
120 children and 40 Coordinators attended the workshop conducted in Don Bosco, Okhala, Delhi from 17 to 20 July 2014. The children were present from 22 states 3 Union Territories. The workshop was on child rights and how children are treated unequally across India and how the social audit could be conducted. There were also sessions on expressing the rights through various art forms like dance, music, painting, puppetry etc. On 18th July Nelson Mandela day was celebrated midst 1500 children and officials from UN Consulate, ILO and UNICEF. Children pledged to make poverty history by beating drums.

On 20th the officials from UNICEF were present for the valedictory. Children performed the various art forms they had prepared to elucidate the four major rights. Two participants represented BREADS CREAM Network, Master Bharath Kumar H. R. from BOSCO Bangalore and Master Suhas B. G. from Don Bosco School, Yadgiri.
The highlight of the campaign was giving away the ‘Rice Advocacy and Justice Awards’ A National Justice and Advocacy Honour. Children from across India were eligible for the award for their outstanding contribution in Justice and Advocacy. Bharath Kumar H. R. form BOSCO representing CREAM (Child Rights Education and Action Movement) network was among the five selected from 20 candidates whose names were nominated for this prestigious award. Bharath was recognized for his active involvement in KCRO & CREAM network initiatives in various campaigns and his involvement in child parliament in BOSCO Vikas and community involvement during vocation in creating child rights awareness. He was awarded with a citation and Rs. 10000/- in the name of the school for social activities. We congratulate Bharath and wish him all the best in his future endeavors as a child ambassador and activist of child rights.