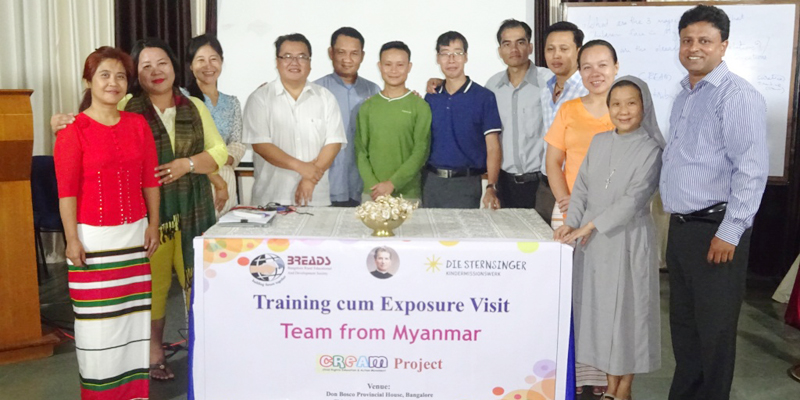 The two days of training included an exposition of the various child rights projects of BREADS especially CREAM (Child Rights Education and Action Movement). The team was introduced to the various interventions of BREADS to address the issues of child labour, school dropouts, unaccompanied children on the streets and child marriage. The most important strategy that was thoroughly discussed was that of community participation in eradicating these child-related problems, especially through the participation of children. In order to elicit community participation, all the stakeholders especially the children, need to be trained on child rights and its violations. The group was enlightened on the importance of creating platforms like child rights clubs, and children’s parliaments at the Gram Panchayath where they could exercise their rights to participate and fight for their rights.

The team also discussed in groups about the common problems children face in Myanmar and also devised new strategies based on their learning from the training. They were introduced to the modules that could be used for various trainings and detailed instructions on how to form a child rights club. Individual action plans were made about what they could do in Myanmar. The group met together twice to formulate a common action plan for the whole country. The team elected a President, Vice President and Secretary who would convene meetings in Myanmar regularly and prepare proposals and action plans as a team. They were very interested in working as a team though they belonged to different organizations and dioceses.

During the exposure visits, the team had the opportunity to visit child rights clubs, tuition centres, social workers and task forces which included Presidents of the Gram Panchayath, elected members, PDOs (Panchayath Development Officer), health workers, Asha workers, headmasters, teachers, children and parents. The teams also went through the documentation and reports. The most inspiring were children from the child rights clubs who shared the various actions they had initiated in order to promote child rights, and to protest and stop violations.

Overall, the team was happy with the training and visit, which was evident from their active participation and from their evaluation. They promised that they would go back and send a revised action plan to take forward their learnings from the visit.