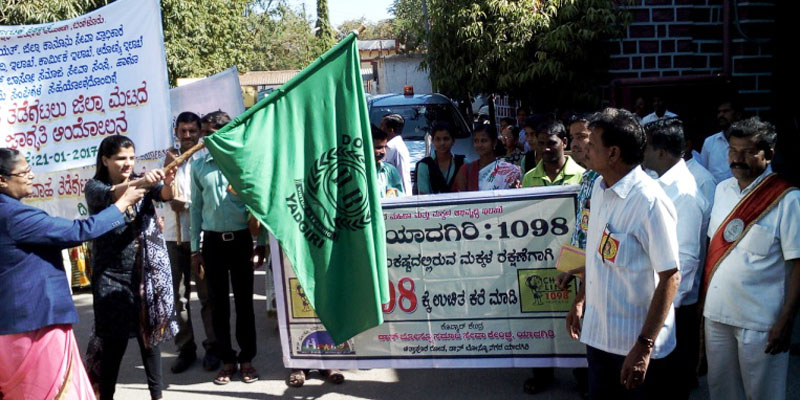 Don Bosco Social Work Center, Yadagiri and Mr. Chandrakanth Jadhav, Deputy Director, with help of government departments and NGOs in the district, organised an anti-child marriage rally to exhibit their contempt for child marriage. The campaign was organized on 21 January 2017 and the rally went on for about 3 hours in the first half of the day. The rally was flagged off at District Collector’s office, Yadagiri and went via Shastri Chowk, old Bus Stand, Market road, Inspection Banglow Road and ended at Subhash Chowk, right at the heart of the city. Nearly 180 members including government officials from Department of Women and Child Development, Child Labour Dept, District Child Protection Unit; district Childline team, Anganavadi supervisors, Anganavadi teachers, Asha workers, Self Help Group members & CREAM II Staff participated in the rally. District Collector gave an inaugural address and stated that Yadagiri should work hard to stop child marriages in the district.  This kind of initiatves for public awareness to prevent child marriage should be frequently replicated through special event, campaigns, and media coverage to gain the attention of the society to stop child marriage.  Pamphlets were distributed, announcements were made, banner and placards were displayed and the participants shouted slogans during the rally to explicitly express their views against child marriage. The urge of the stakeholders to prevent child marriages have reached many people in Yadagiri on that day, and is expecting a positive effort by the society in this regard.