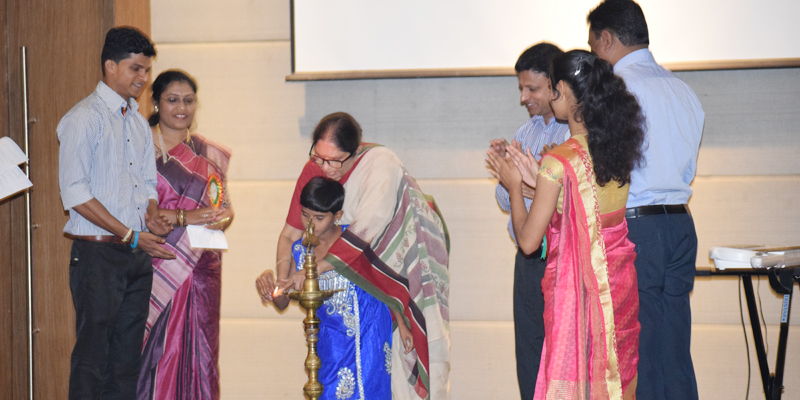 BREADS Bangalore hosted the much awaited event ‘Champion a Child’ to honour 10 Champions on 19 November 2016 at My Fortune Hotel (ITC), Richmond Road, Bangalore to observe ‘Children’s Week’. BREADS honoured 10 champions, where 5 of them have achieved great heights fighting odds in life and the other 5 have made remarkable changes advocating child rights in young age. The guest present for the event were Prof. Shantha Sinha, renowned anti-child labour Activist, Padmashree and Magsaysay Awardee, she is also founder of M.V. Foundation Hyderabad, Ms. Kathyayini Chamraj, Executive Trustee, CIVIC Bangalore and Freelance Journalist; Fr. P. S. George, Province Economer, Don Bosco Bangalore Province and 10 champions from different districts of Karnataka. Many other eminent guests were present to support the event including representatives from 26 different corporate and foundations. Fr. Joy Nedumparambil, Executive Ditrector, BREADS Bangalore welcomed the gathering and spoke about BREADS intention of organising the Champion a Child event. Champion a Child of BREADS will be an education sponsorship programme which work towards empowering children through education.  The official video on the concept and the website of Champion a Child was launched by Ms. Shantha Sinha, Priscilla and Eramma.  It was proud moment for BREADS, that BREADS through Don Bosco partners have played an unambiguous role to mould these champions. The Awardees were bestowed with a medal and a cheque followed by screening a short movie narrating a gist of each one’s achievement in life. The champions had an opportunity to speak a piece of their mind and their motivation in life.  The audience were amazed with the determination and courage they had to achieve heights in life. There was little easing after business; renowned violinist Mr. Manoj George and artist Mr. Thomas Kallarackal enlivened the event with their remarkable performance.

The champions awarded and honoured were

He ran away from home to the streets of Bangalore, but he turned around his life with the help of Don Bosco and is now a teacher, guiding children.

B Jyothi – In the Arms of an Angel

A Marathi girl and rescued child labour. She lost her family….now she finds families for children after her social work studies.

Gangadhar – Don’t Give Up

From a solvent addicted child of the street to a National floor ball player, aspires to be war journalist for nation.

Jyothi M. – No Women No Cry

Eramma fought relentlessly to release a child domestic labourer against the will of the child’s parents and influential employer.

Panduranga- Get up, Stand up

He with his friends had to do battle with some antisocial adults to reclaim their school playground, They Won!

Shashidar – You Raise Me Up

Bhumika – I have a Dream

She had the courage to prevent the marriage of her sister who was a minor and say no to motherhood in childhood.

English teacher, electricity and PHC in her village was Priscilla’s demand from the local MLA knowing that were her rights