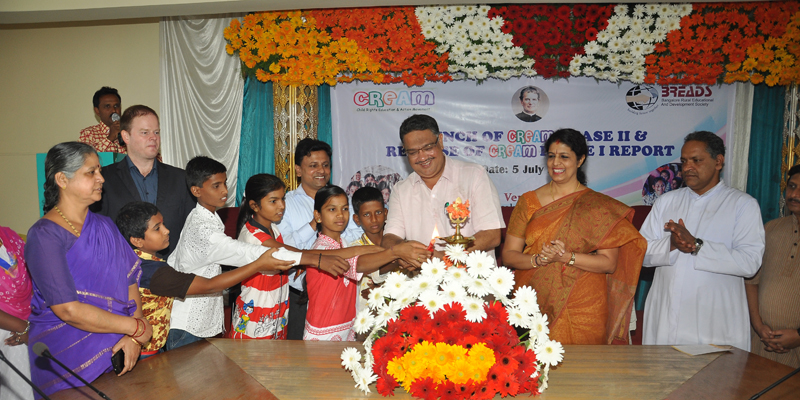 Mr. Tanvir Sait, Minister of Primary and Secondary Education & Minority Welfare, Government of Karnataka, officially launched the second phase of the “Child Rights Education and Action Movement (CREAM) initiated by BREADS (Bangalore Rural Education And Development Society) on 5th July 2016, at Shasakara Bhavana, Vidhana Soudha. He also released the report of CREAM Phase I. “Education is must for the development of any nation. We should improve the quality of education in our government schools and it should be accessible for all our children.  A project like CREAM is a platform for the children to participate and exercise their rights. Though the Education department is trying its best to give education to every single child in the state, it is depressing to know that there are many children who drop out of school. It is important that the children express their opinion and practice their right to participate, and this will be possible through child rights clubs established and functioning in schools” says the minister.

Fr. Mathew (Joyce) Thonikuzhiyil SDB, the Provincial of Don Bosco Bangalore presided over the function and inaugurated the CREAM II project in 10 districts (Bangalore, Ramnagara, Mysore, Bidar, Gulbarga, Yadgir, Chitradurga, Bellary, Raichur, and Davanagere) by lighting 10 lamps with the child representatives and project staff from each district. He also said it is important for children to be in the families to enjoy their rights to the fullest and suggested that CREAM should take action so that no children will be out of their families. Ms. Kavita Ratna, Director Advocacy-CWC Bangalore released the Participatory Action Research Report of CREAM Phase I during the occasion.

Ms. Kripa Alva, Chairperson KSCPCR stated that during her visit to the 10 districts of Karnataka, she understood that the CREAM programme was extensively engaged in educating children and stakeholders on protection of child rights; hence KSCPCR would like to extend wholehearted support for a programme like CREAM. Mr. Gotz Ortmann, Cultural Officer of the German Consulate General Bangalore; Ms. Narmada Anand Director ICPS, Bangalore; Mr. Nagasimha G Rao, Director CRT Bangalore; Ms. Margaret Sampath, Deputy Director SICHREM; Ms. Kathyayini Chamaraj, Executive Trustee, CIVIC Bangalore, Fr. Joy Nedumparambil, Executive Director BREADS; Miss Bhoomika, CRC representative from Davanagere, Master Kumar R, CRC representative from Mysore spoke on the occasion. Miss Bhoomika spoke from her own experience of stopping the child marriage of her sister in her own house. She said protection of child rights should start from our own families and every child in CRC should play a part in the protection of child rights.

Representatives from 10 districts, NGOs, civil society organizations, Government departments were present during the inauguration. Representatives from Save the Children organisation were also present. The programme came to an end with vote of thanks by Fr. Lawrence SDB, Director DB Hospet, Bellary.

Advocacy and Network Actions at District and State Level